Breaking News
Home / Work/Life Balance & Happiness / The Happiness Track: How to Apply the Science of Happiness to Accelerate Your Success The Happiness Track: How to Apply the Science of Happiness to Accelerate Your Success

Theodore Kinni of readingwritingmanagement.blogspot, comments on the book: The Happiness Track: How to Apply the Science of Happiness to Accelerate Your Success (Harper One, 2016), by Emma Seppälä.
In it, Seppälä, the science director of Stanford School of Medicine’s Center for Compassion and Altruism Research and Education, argues that the pursuit of happiness is actually a key to achieving professional success — not an obstacle to it. 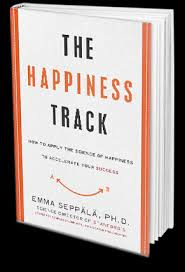 Unlike much of the literature about happiness at work, The Happiness Track doesn’t approach its subject from an organizational perspective. There are no free lunches on offer. Instead, Seppälä focuses on six personal “strategies for attaining happiness and fulfillment [that] may, in fact, be the key to thriving professionally.” If you’re familiar with the discipline of Positive Psychology, it’s likely that you’ll have run across these ideas before: be in the moment; nurture your resilience; manage your energy; access your creativity; be good to yourself; be compassionate.
Seppälä taps a variety of research to explain and illuminate the six strategies and the challenges that adopting them can entail. One of the studies she cites to support her contention that doing nothing isn’t so easy sent me scurrying in disbelief to the source.
Timothy Wilson, a psychologist at the University of Virginia, put subjects in a room alone and gave them the option of doing nothing at all or pushing a button to give themselves an electric shock. All the subjects said they would pay to avoid the shock. And yet 67 percent of the men and 25 percent of women chose to shock themselves rather than be alone with their thoughts, even after receiving a sample shock.
Seppälä offers a set of simple tactics for practicing the pursuit of happiness. Several of them, such as the breathing, meditation, and active listening techniques, are recommended more than once. Seppälä also cites some of the creativity-enhancing tactics that Scott Barry Kaufman and Carolyn Gregoire described in Wired to Create: Unraveling the Mysteries of the Creative Mind. But as with that book, practices that are intended to foster different mental states sometimes contradict one another. For example, you should immerse yourself in an experience to be fully in the present moment. At the same time, you must divorce yourself from the moment to be objective and calm. It seems one secret to happiness is knowing which strategy to pursue in a given situation.
Although I don’t doubt that you’ll be happier at work if you follow Seppälä’s advice, I don’t find her thesis — that happiness accelerates career success — convincing.  “Decades of research have shown that happiness is not theoutcome of success,” she declares, “but rather its precursor.” That sounds definitive, but I wonder if the relationship between happiness and professional success is more akin to the relationship between happiness and longevity.
In December 2015, The Lancet reported the results of a long-term study that included more than 700,000 women aged 50–69 in the U.K. It found no correlation between the subjects’ happiness and the length of their lives. Would a similar study of CEOs reveal that there is no correlation between happiness and professional success? Don’t we all know highly successful people who are desperately unhappy?
Regardless of the correlation, to me, there is no one more pitiful than someone who has attained all the trappings of success and is miserable nonetheless. Striving not to be one of those people is the best reason to read The Happiness Track.
Share According to Andrew Pearce of MarketWatch, for some women in London’s financial sector, the secret …